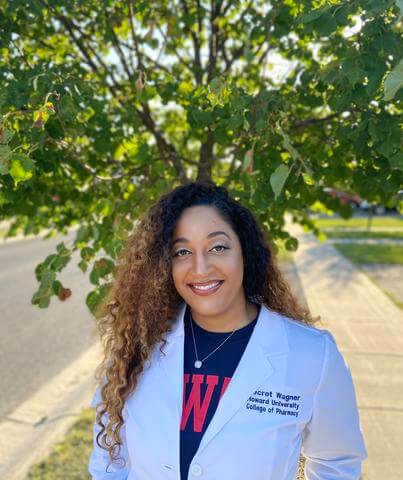 On day one of my rotation at the CVS embedded in Target, I was expecting minor computer work and training to take me through the day. Little did I know, I would be jumping in headfirst with my preceptor, Barbara, and the rest of the team. The next words I heard set the tone for the duration of my rotation. Mrs. Barbara simply stated, “well, the only way to learn is to be hands on so, let’s get right into it!” This was an overwhelming moment as it was my very first experience working in a pharmacy. I started with putting the prescription labels in a basket and pulling those drugs off the shelf for the technicians. This allowed me to get familiar with where the drugs were located, how to pronounce the drug names, looking at NDC and dose forms. She would randomly ask what the drug class was and what it was used to treat. I remember being comfortable answering these questions because of our work in my first year of pharmacy school to learn the top 300 drugs. This was so impressive to the staff that I quickly moved on to scanning, counting, bottling, labeling, and sending those prescriptions directly to the pharmacist to review before bagging and heading to the customers or holding bins. Seeing the production queue cleared out at the end of a day’s work was so rewarding. Multiple times we could clear over 300 prescriptions, which I think was rare prior to the start of my rotation. Some prescription labels would print with bin numbers that previously did not exist and it's because daily production increased. This may seem like something small to many, but I found this brought me so much joy knowing I was helping this rotation site rather than being and hindrance. Yes, I was there to learn, but who knew my learning would turn into helping.

Once I understood where things were in the pharmacy and the production process, I moved on to looking at the actual prescriptions sent over by the doctors. We would refer to this as QT. In the Triage Queue, you would verify everything: the prescriber’s information, the drug on the prescription, and ensuring patient friendly instruction of how to take the prescription. I was instructed on the importance of quantity requested and dispensed, insurance, etc., and the repercussions of mistakes. This was important because once you reviewed it, completing it meant that to the best of your knowledge everything was correct and ready for distribution. If something were not, it would come back with an error message. This was challenging because there could be so many different reasons for an error message. Errors could include insurance errors, incorrect/issues with instructions, too soon to fill, and sometimes, simply computer errors. This process was my biggest challenge. With so little time to learn the inner workings of the site, I found myself frustrated with the sole necessity to learn this portion on the job.

My favorite part of this rotation was interacting with the patients. Whether by phone when I did patient care calls or seeing them in person answering questions, patient counseling was fulfilling and humbling. Patient care calls consisted of adherence checks, seeing how patients were doing on a new medication, and seeing if they were interested in syncing multiple prescriptions so they could pick their medications up on the same day. Also, the pharmacy I did my rotation at administered shingle vaccines so there were many calls to remind patients to return for their second shot. I would also make calls to patients to see if they were interested in having their prescription mailed with the delivery services we offered. These customer interactions solidified just how important it is to be confident in the knowledge I possess and how I deliver it to the patients. People will trust whatever you tell them as the pharmacist and that responsibility is not to be taken lightly.

Finally, I learned that the role of the pharmacist is changing in retail chains. They want the pharmacist tending more to patient care calls and having more one on one communication with the patients. To be completely transparent, I had no idea I would be entrusted with doing so much for my first rotation, but because of the knowledge I received in the classroom and an amazing preceptor I was able to do a great job and represent my university very well. Most importantly, I gained a wealth of knowledge and experience in a short amount of time. This rotation not only provided me with my first pharmacy experience, but it provided a peek into possible career options to consider.