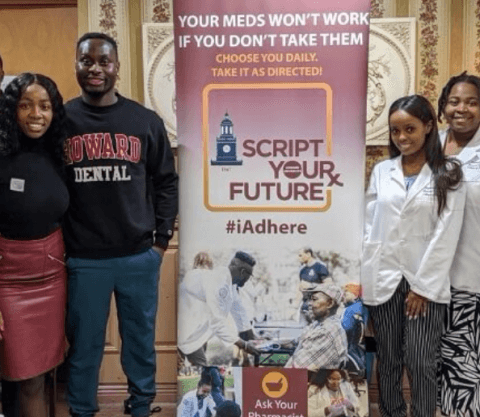 WASHINGTON (July 23, 2020) - Howard University College of Pharmacy has been nationally recognized with the Rookie Award from the National Consumers League (NCL) for its participation in their annual nation-wide “Script Your Future” competition on medication adherence.

The competition is designed to engage health profession students and faculty across the nation by encouraging teams to develop creative initiatives to raise public awareness about the importance of medication adherence. Howard pharmacy students led a collaboration with counterparts from the School of Social Work and the Colleges of Dentistry and Medicine.

“Community outreach is at the core of the College of Pharmacy's 'We are LEADERS’ mantra,” says Nkiruka Emezienna, fourth-year pharmacy student and a leader on the project.  “Given our mantra, this award means that much more."

Howard students hosted several outreach events across the Washington region from January to March 2020. The target population included homeless or displaced minorities, children and parents, and adults with behavioral issues. This year marked the College of Pharmacy’s first entry into the competition.

“Our goal is to impact the health and wellbeing of D.C. residents,” says College of Pharmacy Dean Toyin Tofade. “I am so proud of our dedicated students, faculty, and staff who worked hard together to make this happen. We are particularly grateful to all our sponsors: Gilead Sciences, Walgreens, GoodRx, and Safeway.”

The team tailored its disease focus to diabetes and heart disease, as they are chronic conditions that plague the region. Throughout the challenge, Howard students directly counseled close to 400 patients and reached more than 1,000 people with the help of 169 students and volunteers and distributed nearly 1,000 Script Your Future medication adherence resources.

According to the National Consumers League, medication non-adherence can lead to devastating health outcomes. Research shows that nearly one in five prescriptions go unfilled and half of all patients with chronic illnesses do not take their medication as prescribed.

Improved medication adherence leads to better health outcomes and reduced total healthcare costs, and it was for these reasons that NCL launched the Script Your Future awareness campaign in 2011. The Team Challenge was established to extend campaign messages into medical and other schools of health professions, and to nurture adherence-minded values in future generations of professionals entering the workplace.

Photo caption: Students from the Colleges of Pharmacy, Dentistry and Medicine take a group photo after providing blood pressure and oral health screenings to patrons of Jesus House Church in Silver Spring, Maryland on February 16.